Hi guys! It’s been a few days! Tonight I’m playing catch-up so I have two posts for your viewing pleasure. First up, I have a very special polish called Brooklyn Shenanigans by a new to me brand, Great Lakes Lacquer. I had a few of her polishes back in 2015 but I never got around to wearing them before selling them both to someone who really wanted them. So this is the first time I’ve actually worn a Great Lakes Lacquer polish. And I have to say, it’s absolutely beautiful. This particular polish was a Polish Con NYC exclusive, but luckily I had a good polish friend, Lianne, who was able to pick this up for me in New York. It was sold in the Great Lakes Lacquer store afterwards, but sold out fairly quickly. So sadly, this one is no longer available.

As soon as I saw the very first bottle shot, I knew I had to have this polish. It’s described as a royal purple linear holographic with a multichrome shift from intense red to gold and orange. I wouldn’t call it royal purple personally, more like a berry or a plum. Don’t get me wrong, it’s stunning, but I found the shift to only show in the sunlight and at certain angles. But when it did show, it was worth it. Also something to note was that it chipped relatively quickly on me, within a day or two. However, as this is my first Great Lakes Lacquer, I can’t say whether that was a body chemistry thing or a fluke. And who knows, maybe I was rougher on my hands than usual. More Great Lakes Lacquer is in order…for science! 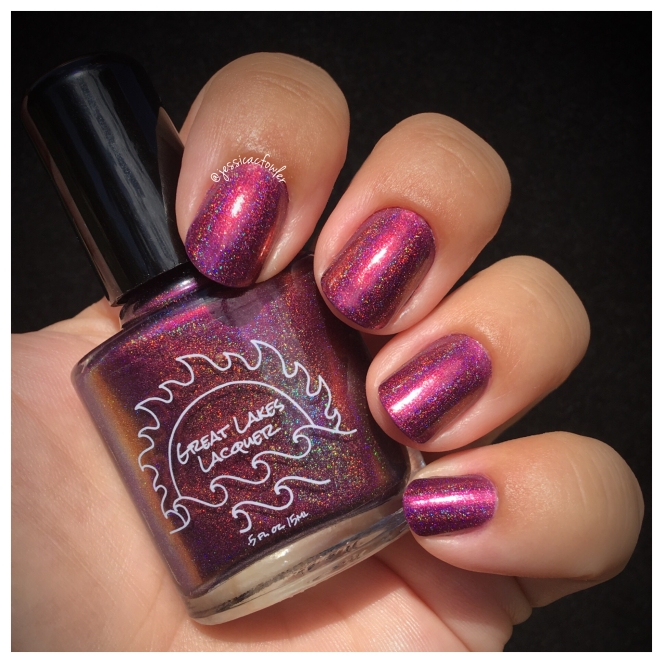 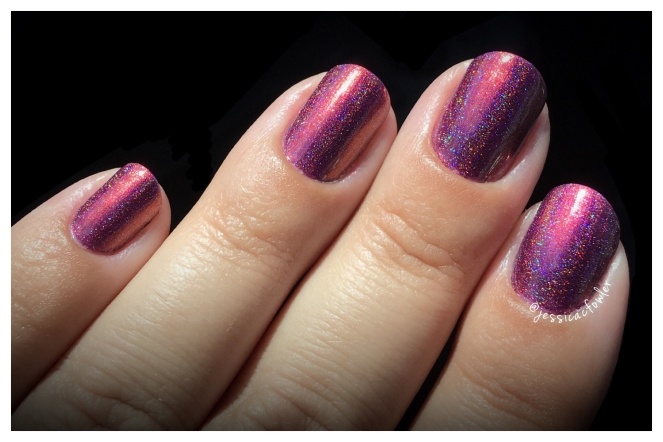 Overall, I would rate this a positive first experience with Great Lakes Lacquer! The polish was absolutely beautiful, if not exactly what I was expecting. And I’m hoping the shorter wear time was my fault, because I am already adding to my Great Lakes Lacquer collection! I have some stunning Hella Holo Customs exclusives on the way to me! I can’t wait to wear them.

Thanks for reading,
Jessica