Purchased by Me with Swatcher Discount

Hello there! I have a rather large post today, but it’s full of some seriously stunning polish! Today I have my picks from Tonic Nail Polish’s February Release. These polishes are currently on preorder in Tonic’s online shop. The Unicorn Pee polishes are limited to one per person and will be up until March 7th, and the rest will be up through at least the end of March. I don’t know if I can say that any of these are not must haves, but hopefully this post will help some of you decide. I chose to do three thin coats, my personal application preference, on most of these for depth of flakies and nice, fully opaque coverage. The formula on all of these was great though, not too thick or too thin. Even the UP colors had great coverage! Sometimes I find UP jellies to be quite sheer, but these were wonderful! I had no application or removal issues at all.

Tonic Polish Bauble
Three Coats, No Top Coat, Shown In Sunlight
The sister polish to Curio, this is a blurple jelly with Unicorn Pee pigment, which is a very rare and scarce red to gold to green shifting shimmer pigment. In addition to the UP, this polish is full of some gorgeous complementary red to gold to green shifting iridescent flakies. I love this jelly formula, it is just perfect in three thin coats. 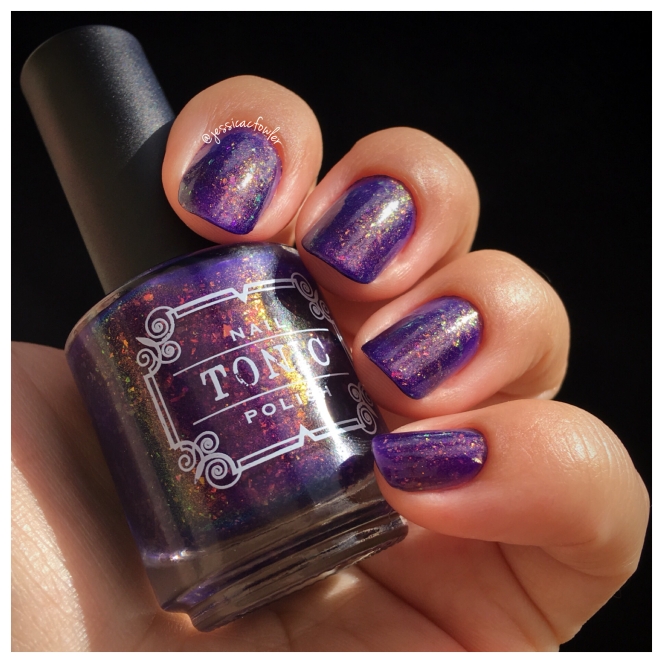 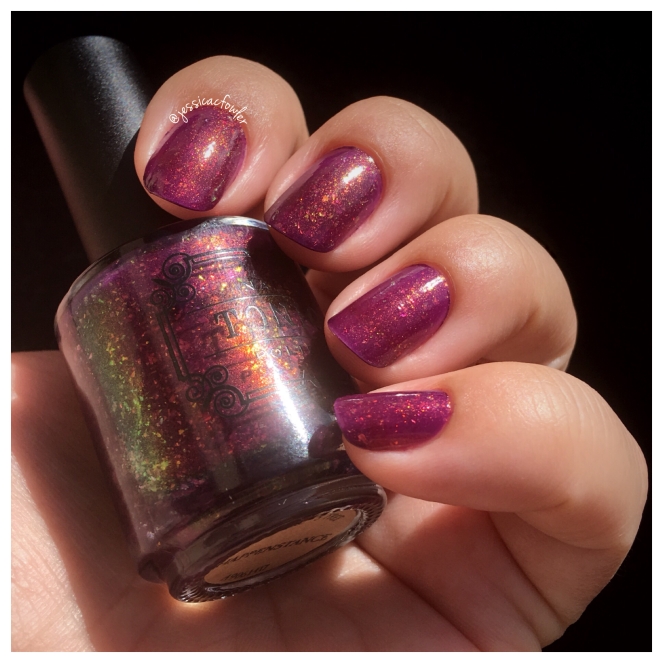 Tonic Polish Bauble Oops
Three Coats, No Top Coat, Shown In Sunlight
This polish is actually a very happy accident! Lindsey transposed the measurements for two ingredients used to make Bauble in her recipe and mixed up a batch of Bauble that was sent out to some of the first orders in the preorder. Of course, she immediately sent out replacements when she noticed, but I was lucky enough to receive one and it is the perfect true purple version of Bauble and Happenstance. It’s between the two in color, leaning slightly to the red side. I found it to be just a tad more sheer than the others.

Comparisons
Three Coats, No Top Coat, Shown In Sunlight
Here I have, index to pinky, Bauble, Bauble Oops, Happenstance and Serendipity. The bottle I am holding is Bauble Oops. 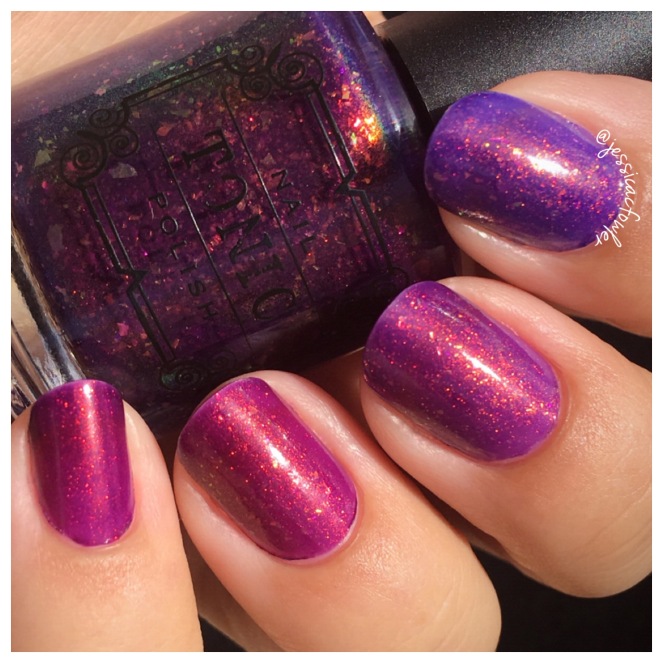 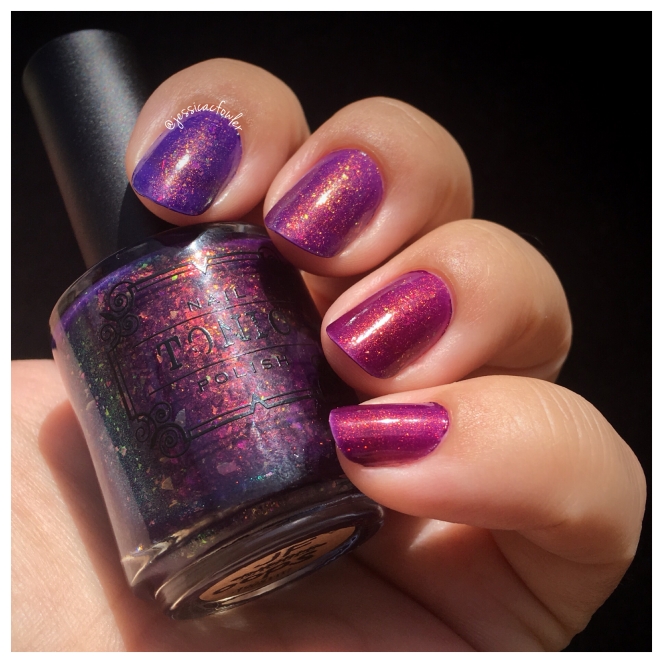 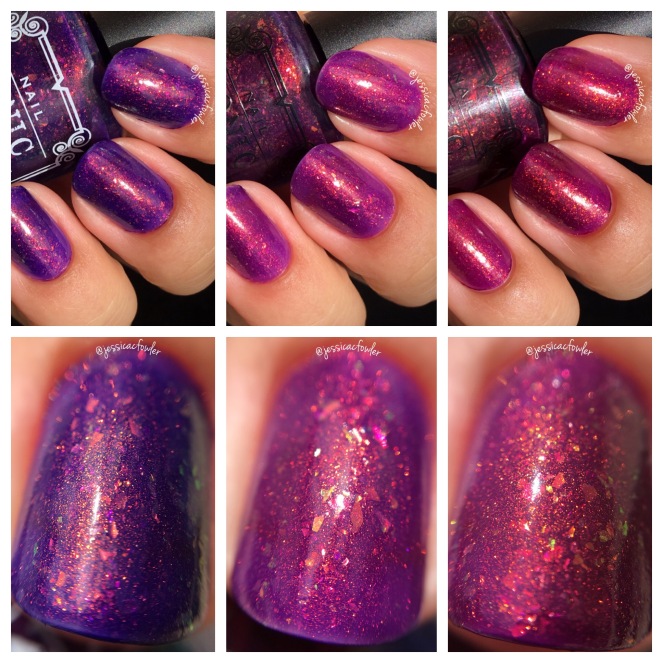 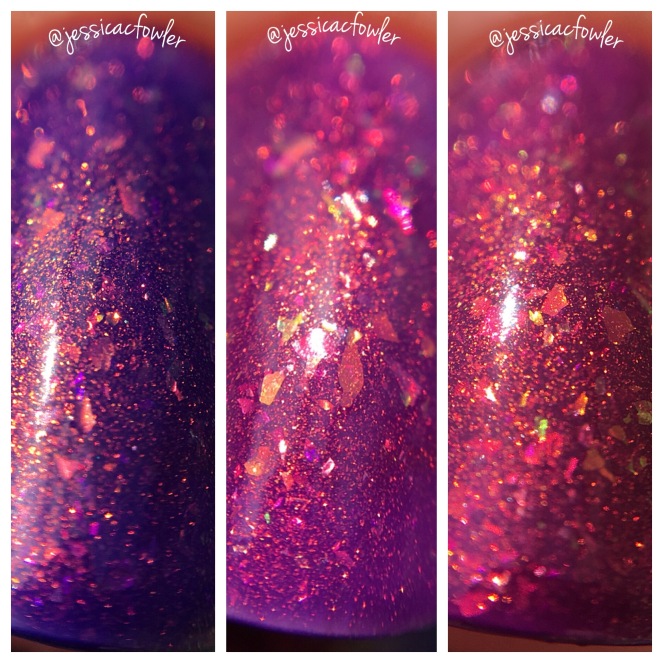 Tonic Polish Exra-ORD-inary
Three Coats Plus Top Coat, Shown In Sunlight
This is an extremely holographic gunmetal or steely grey polish with red to gold to green color shifting Aurora flecks that give the holo flame a warm glow. To me, it looks almost like a golden shimmer and it adds a lot of depth. Extra-ORD-inary was a Polish Con Limited Edition and this is its preorder debut! 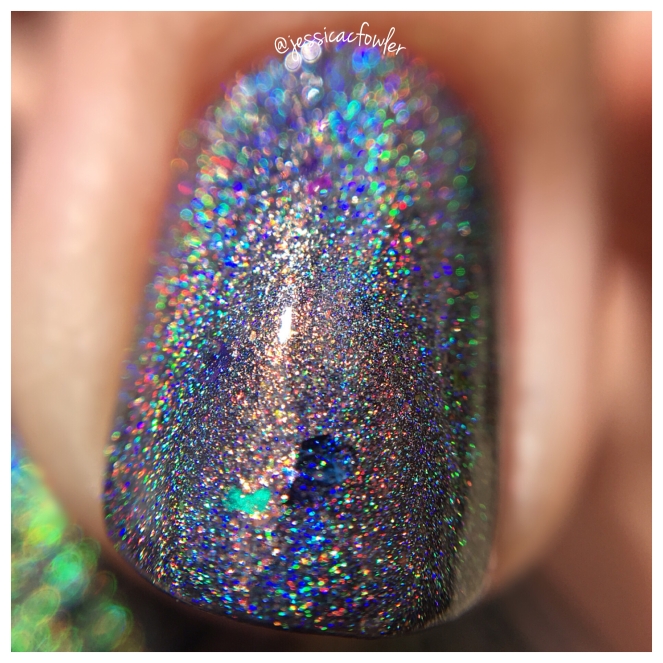 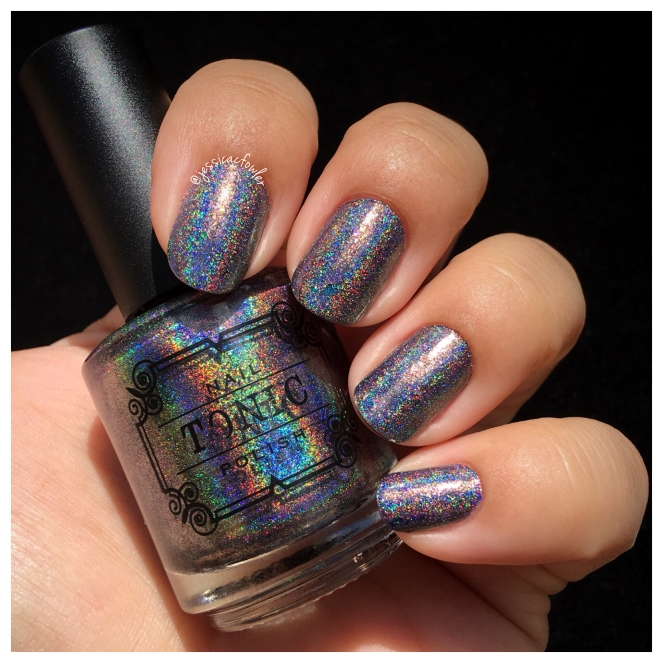 Tonic Polish Verklempt
Three Coats Plus Top Coat, Shown In Sunlight
This is a silver scattered holographic polish with green to blue to purple to magenta multichrome shifting flakies. Verklempt, formerly known as Promo F17-3, was originally a special giveaway polish from Polish Con but Lindsey decided to make it available to all! 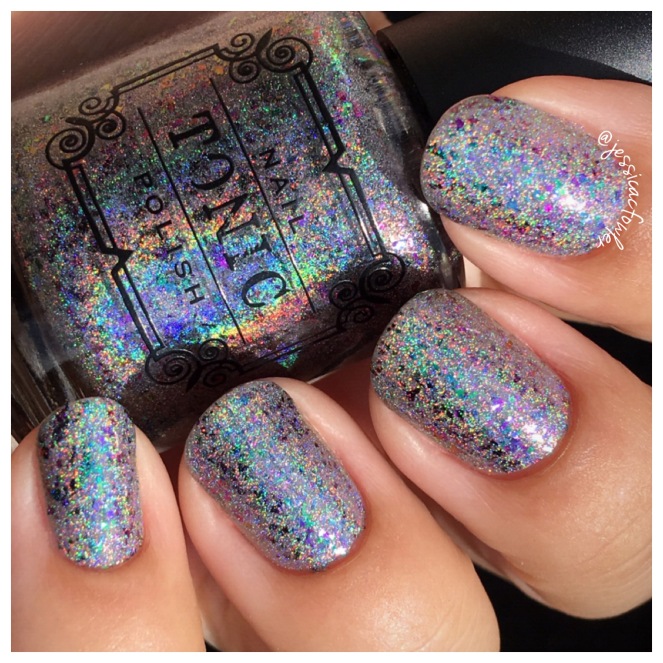 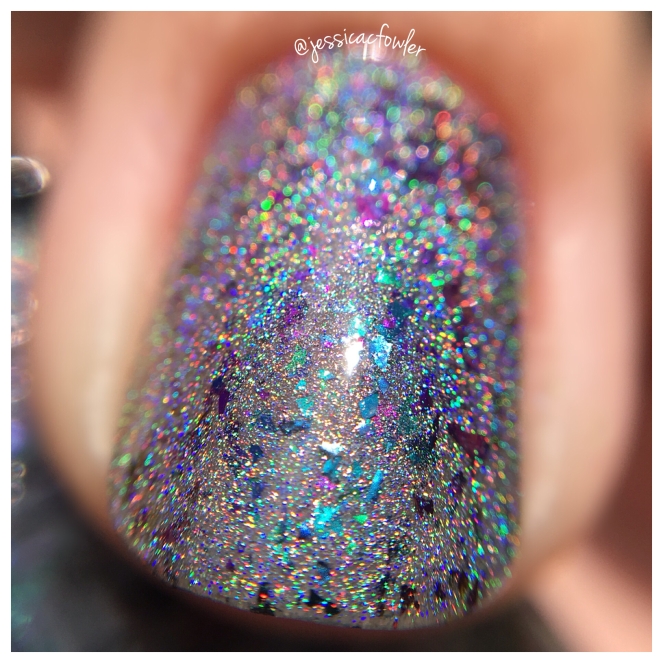 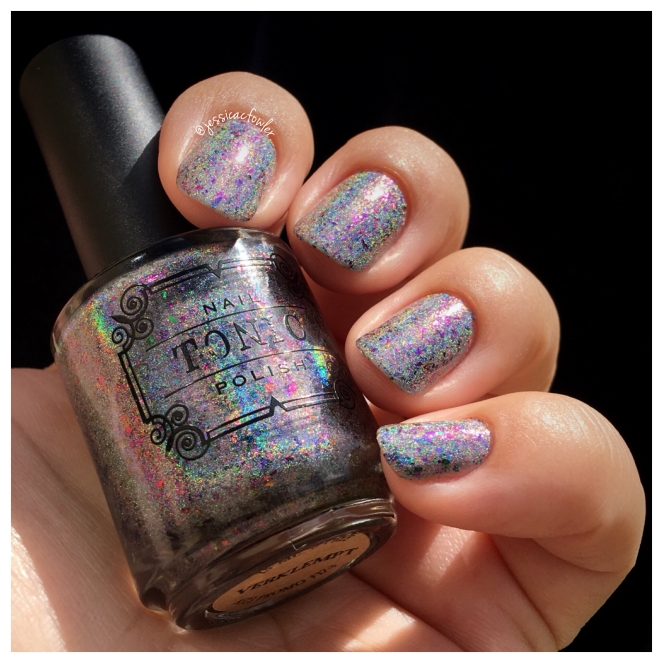 Tonic Polish Fig-ure It Out
Two Coats Plus Top Coat, Shown In Sunlight
This is the deep royal purple linear holographic with reddish copper multichrome shimmer and iridescent flakies of my dreams! Fig-ure It Out was another gorgeous oops color, previously called Promo F17-2, that Lindsey so graciously made available to everyone after a small release at Polish Con. This polish began its life as a batch of Be My Violet-tine when Lindsey accidentally added holographic pigment. I’m so glad she did! 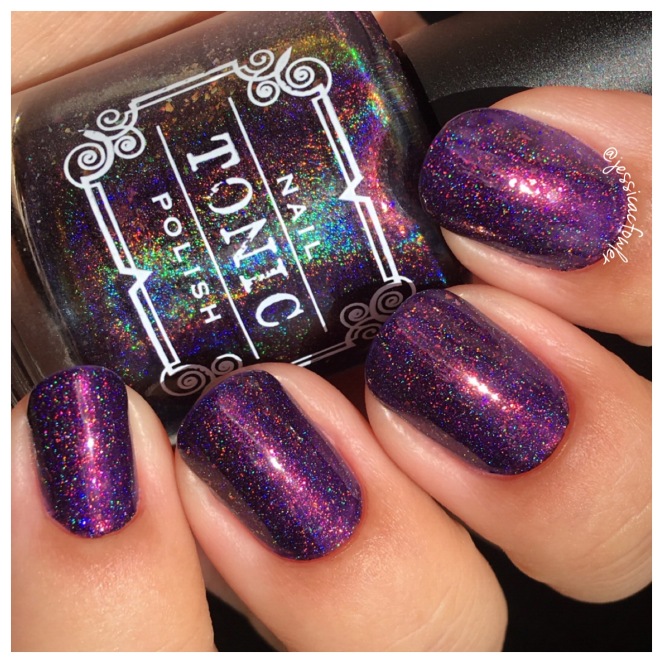 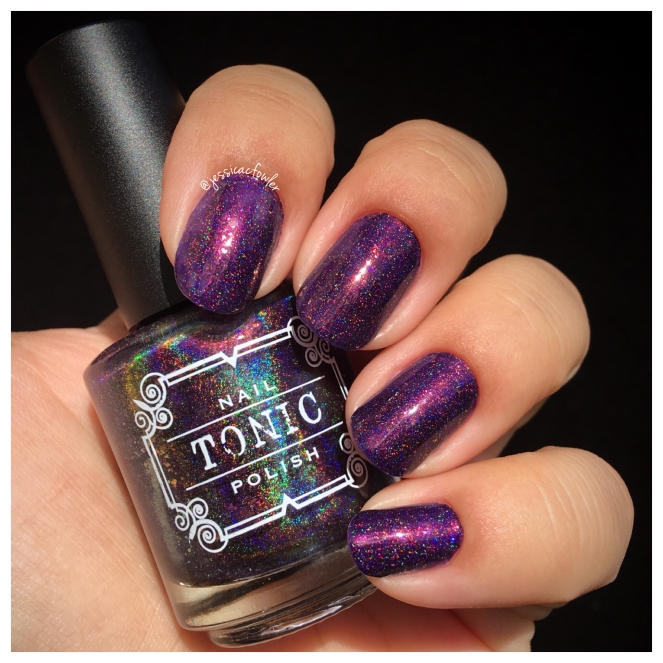 Tonic Polish Ambrosia
Three Coats Plus Top Coat, Shown In Sunlight
This is the sister polish to Ember Light, which was a polish Tonic released as part of the Seasonal Indie Box for Fall of 2017. Lindsey just loved the effect in that polish and wanted to create something new in that same style. Ambrosia is a dark blue leaning teal polish with red to gold to green shifting multichrome shimmer and scattered holo. This polish is my definite favorite out of the bunch, and possibly my favorite Tonic ever. The shimmer is out of control! 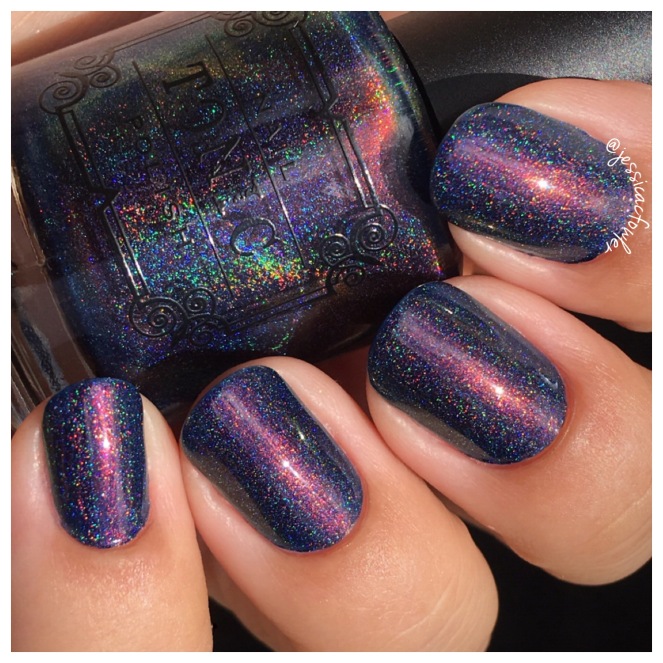 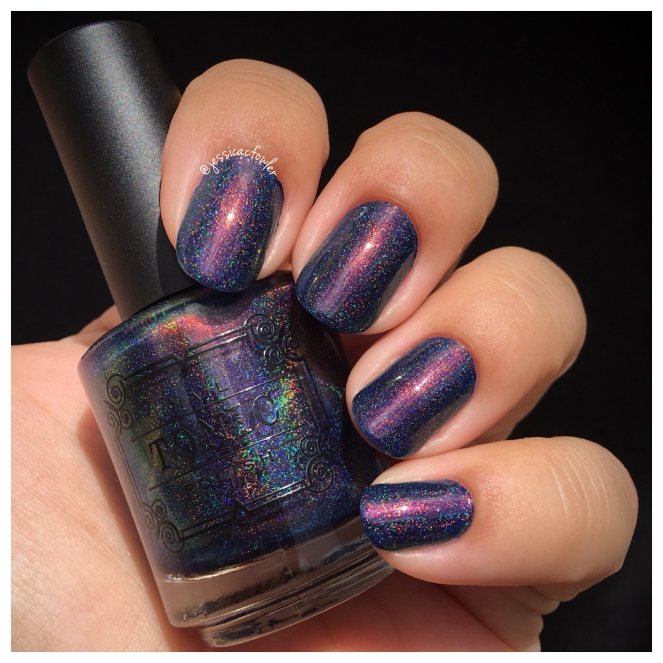 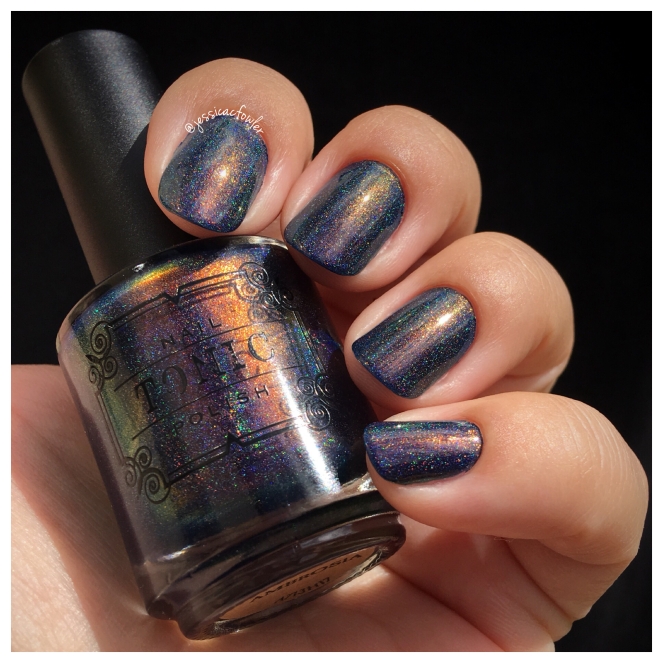 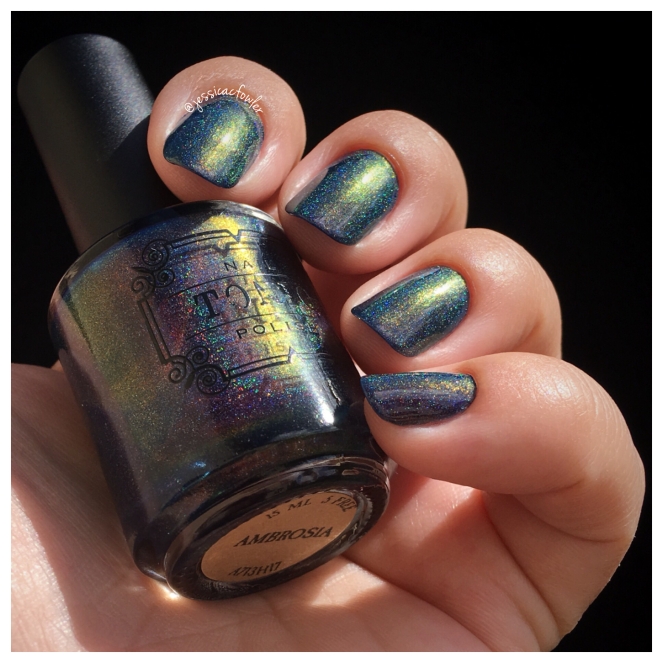 So, there they are! I really do think each one of them is gorgeous! Here are the details again: the Unicorn Pee colors, Bauble and Happenstance, will be available on preorder in Tonic’s online shop for just a few more days, until March 7th. The others will stay around much longer, until at least the end of March. Turnaround time is currently two to three weeks for this preorder, but my order came much quicker! Lindsey, Amy, Chris and team are top notch when it comes to customer service!

Thanks for reading,
Jessica